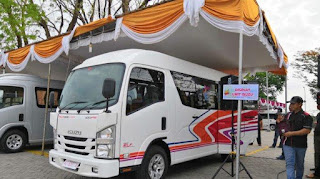 According to data from the Association of Indonesian Automotive Industries (Gaikindo) until November this year for the category of buses, pickups and trucks alone, total sales reached 240,902 units, up 18.9% compared to the same period last year of 202,570 units.

Kukuh Kumara, Secretary General of Gaikindo still predicts market growth next year. "Next year there will be a strong signal that it will grow, especially sales in the commercial or commercial vehicle segment even though the passenger vehicle segment has not been balanced," he said.

With the double digit growth in the first eleven months of this year, the commercial vehicle segment was above the average increase in national car sales from January - November 2018 to reach 1,063,464 units, up about 7% from the same period last year of 994,799 units.

For President Director of PT Isuzu Astra Motor Indonesia (IAMI) Ernando Demily, Indonesia benefited as one of the developing countries with economic growth above 5% and an increase in the number of middle classes stimulating demand for this car segment.

"The development of commercial vehicles in Indonesia is very promising, not only driven by the mining and commodity sectors, but also helped by infrastructure development in Indonesia and increased logistics due to the trend of e-commerce shopping," he explained to Kontan.co.di, Sunday ( 12/16).

Therefore it is not surprising, some new players are starting to explore the vehicle segment. Call it Wuling Motors, which recently officially launched its first Light Commercial Vehicle (LCV), 1,200 cc Wuling Formo.

Seeing this phenomenon, actually Ernando was not surprised because he acknowledged the growth trend of commercial vehicles was very promising. "So it certainly attracts other brands to come into play," he said.

For commercial vehicles, Ernando said Isuzu still favored the potential of its diesel engine to compete in the market. Until November 2018, Isuzu recorded light truck retail sales growth above 20% yoy.

He explained, sales growth in this segment was helped by sales in the mining, logistics and transportation sectors. Consumer acceptance of the new variant NMR 81 HD is considered quite good.

From Tata's record, retail sales of company trucks from April to September this year were 180 units, higher by 109% compared to the same period in the fiscal year 2017-2018. "The logistics market is still good which helps sales. Brands such as Wings Group and DHL have started to buy a lot of our products," he said.

In the future, Tata Motors feels the challenges faced by the company are related to import quota restrictions set by the government a while ago. It is only natural that Tata still imports its products from factories in India.

Kiki stated that currently the company does have a vision to be able to assemble vehicles in a Completely Knock Down (CKD). But there needs to be an economic scale that can convince the principal to put his investment in Indonesia.