The Christmas Moment in the City of Moscow, Not Many New Ornaments Adorn the Face of the City 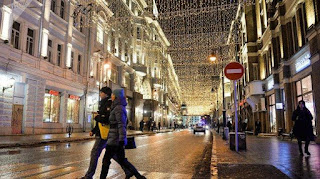 QUX.ME, MOSCOW - Christmas celebrations have arrived, all Christians in the world are celebrating the moment. What about celebrations in Russia, like in the capital city of Moscow this year?

In this one country, not all New Year's Christmas decorations are made annually. In fact, many of the local people use the same ornaments repeatedly.

United Energy Company, Moscow states that the City of Moscow has stockpiled a sufficient supply of decorative ornaments and makes it possible to decorate the city at a relatively low cost.

Quoted from the page Sputnik News, Monday (12/24/2018), there are several large ornaments that are repeatedly used by the city.

Like the light arch that can be seen in Tverskaya and Pushkin Square, as well as at Revolution Square, Kamergersky, Gazetny Lanes, and Novopushkinsky Park.

Both visitors and residents of the Russian capital, were very fond of the 'Starry Sky' lights which adorned the streets of Bolshaya, Dmitrovka and Nikolskaya, as well as the light that emerged from the burning trees. 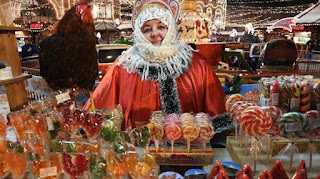 There are various kinds of festivals and Christmas and New Year markets held in Moscow. The markets in Manezhnaya and Red Square have become very traditional moments in the city.

In addition to pavilion rentals, there is a fair amount of entertainment offered by these markets, such as playgrounds, swings, and also an ice rink on Red Square.

Not only that, there are also Christmas markets and exhibitions on the streets that are usually passed by pedestrians such as Kuznetsky Most. There are also various types of entertainment in a number of parks in Moscow, for example the largest ice skating rink in Europe is in VDNKH, Sokolniki and Gorky Park.

All of these changes have made Moscow increasingly popular with tourists, both domestic and foreign.

Many tourists have seen changes in the Russian capital. This year, foreign tourists not only glance at other European capitals, but also choose Moscow as their new year's holiday destination.