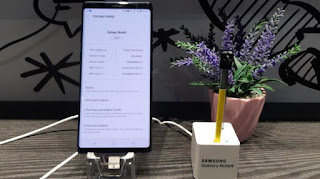 This information is shared by the XDA Developers community after finding a special code on the Android Pie update for the Galaxy Note 9.

The code reveals a feature called "Bright Night". Its function is better than "Low Light" which can only be relied on in dim light conditions.

"Bright Night allows the results of slick photos in very dark conditions," the description in the special code found by XDA Developers.

This feature is actually not a new innovation, but it is still rarely implemented. So far, only "Night Sight" on Google Pixel and "Night Mode" on Huawei's line offers similar functions.

In fact, the way Bright Night works is truly identical to Night Sight on Google Pixel. The code says Bright Night will take several photos at the same time when the light conditions are very dark.

Afterwards, Bright Night will combine these photos into one photo with adequate light levels, as well as the quality and sharpness of a professional camera style, as compiled by KompasTekno, Tuesday (12/25/2018), from TechSpot.

Samsung has not confirmed the existence of this feature. If it is true, users of the Galaxy Note 9 can be the first to enjoy it.

It could also be introduced to the momentum of the launch of the Galaxy S10. Let's just wait!

This article has been aired on Kompas.com with the title "Samsung Develops Google Pixel-like Night Camera Features"