Is this the appearance of the Samsung Galaxy S10, whose rumors are released next month? 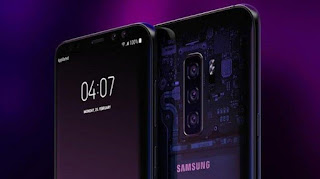 QUX.ME - Leaks about the Galaxy S10 have been swirling in the virtual world in recent months.

Reportedly, the product line that marks the 10th anniversary of the Samsung Galaxy phone will be released around February 2019.

In other words, the possibility of the Galaxy S10 will appear on the MWC 2019 title in Barcelona, ​​Spain, like previous Galaxy S series smartphone models.

Approaching the estimated schedule of its appearance, various rumors about the Galaxy S10 even more heavily circulated.

One of them is a picture that is believed to depict the original figure of the Galaxy S10. This image was circulated by the famous gadget leaker Evan Blass via his Twitter account, @evleaks.

The image displays the front of the device. As has become a byword all this time, there is a camera hole or in the language of Samsung referred to as the "Infinity-O" screen.

It's just that the position is somewhat different from the previous photo showing the camera hole in the middle of the display for Beyond 1.

In this photo, the camera hole shifts to the upper right side. In his tweet, Blass wrote the statement "Beyond 1" which was mentioned as the name code for the Galaxy S10.

In addition to Beyond 1, rumors previously mentioned the presence of the estimated Beyond 2 belonging to the Galaxy S10 Plus, and Beyond 0 for the Galaxy S10 Lite.

From the photo, it appears that the forehead and chin are slightly thick, where the top is still used as a speaker.

While the edge side is very thin with a curved screen. All application icons that appear on the screen are deliberately blurred so it's hard to know what the new features are offering.

Summarized from Mashable, Saturday (05/01/2019), Blass himself only revealed the features of one interesting feature, which is charging other devices wirelessly, as has been implemented by Huawei Mate 20 Pro.

Other news says that the Galaxy S10 will be powered by a new chip made by Qualcomm, Snapdragon 855, and one of the versions will adopt a quadruple-camera or four main cameras on the back.