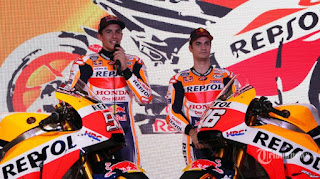 But it depends on KTM to be able to build a competitive motorbike to fight in the hunt for the world title.

KTM has only participated in the MotoGP class for two years and has won a podium donated by Pol Espargaro in the last series at Valencia in the 2018 season.

KTM's seriousness in the MotoGP class is proven by recruiting Dani Pedrosa as a testing racer starting in the 2019 season.

Marc Marquez has the belief that his former teammate would make the KTM motorbike competitive.

"Some know, Dani has a great sensitivity, I'm sure that KTM is doing a great job," said Marc Marquez, quoted by BolaSport.com from Tuttomotoriweb.

"He will definitely make the KTM motorbike a winning motorbike," he continued.

Marc Marquez added that the results of Pedrosa's work could have made him tempted to switch teams.

"If Dani can make KTM as a winning motor, why not ?," said the rider nicknamed Baby Alien.

Marquez himself repeatedly said that he did not have the intention to part with Honda.

Especially at this time, Marquez had a very brilliant career with the Japanese manufacturer with festive five MotoGP world titles.

On the other hand, the KTM RC16 motorbike is still far below the level of Honda, Ducati and Yamaha.