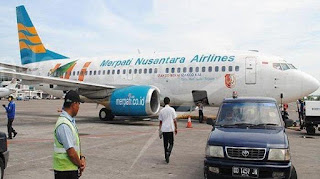 QUX.ME, JAKARTA - PT Merpati Nusantara Airlines (Persero) or MNA is expected to be back on air in 2019.

Deputy Minister of Enterprise Restructuring and Development of the Ministry of BUMN Aloysius Kiik Ro said, Merpati must fly this year.

"This year must be, if not for what. If creditors continue to go berserk again, it is dead," Aloysius said to Kontan.co.id at the BUMN Ministry Building on Thursday (01/03/2019).

Aloysius explained that his party could only execute pigeons after going through several stages. After an evaluation by the Ministry of BUMN, the results will be proposed to the privatization committee that has been formed.

"Then proposed to the Privatization Committee, there was chaired by the Coordinating Minister in this case inviting a meeting, asking for arguments from the Minister of Transportation, the Minister of Finance, and the Minister of SOEs themselves," said Aloysius.

Once approved, it will be taken to the House of Representatives Commission VI for approval. "We will bring the agreement to the VI commission. Then it will be organized. Once it is approved, I will execute it," Aloysius added.

This stage was agreed by the Director of Merpati Nusantara Airlines (MNA) Captain Asep Eka Nugraha. Captain Asep added that he could only enter after the preliminary requirements were completed.

Captain Asep hopes the airline will return to air this year. Regarding the fulfillment of the requirements submitted in the process. "If we keep the process," explained Captain Asep.

To Kontan.co.id Aloysius said he could not comment on the restructuring of pigeons because all were in the process.