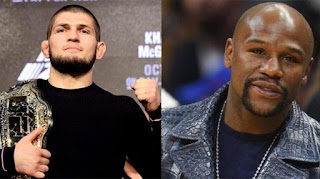 QUX.ME - After being lost in the waves, rumors about the fight between Floyd Mayweather and UFC fighter from Russia, Khabib Nurmagomedov re-emerged.

This time, Khabib's manager Ali Abdelaziz claimed that he had made contact with the American boxer to discuss the continuation of his fight with The Eagle,

"Me and him (Mayweather) sent a message last month, and if he doesn't admit I will show it. Don't lie Floyd," Abdelaziz said as quoted by HAI from TMZ Sports.

Even more surprising, the manager of Khabib Nurmagomedov also said that The Money was begging for him so that the duel between the two of them could really be done.

"He was very begging to fight (with Khabib). I then told him that he was old, had a weak body, and was also fragile," he added.

Ali Abdelaziz himself was convinced that Khabib Nurmagomedov could defeat Floyd Mayweather if the battle between the two really materialized, given that the lightweight UFC champion belt holder could easily defeat McGregor.

"People think I'm crazy but I think Khabib will defeat him. Mayweather thinks he can win easily, even though Khabib is much younger, and also stronger than Conor, who can only be defeated in 10 rounds," he explained further.


What do you think about this? Was Floyd Mayweather really asking Ali Abdelaziz to fight Khabib Nurmagomedov?