Youth and Challenges in the Era of the Industrial Revolution 4.0 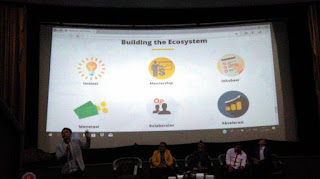 The forum was attended by at least 200 participants.

Discussions related to the material of Youth and Challenges of the Industrial Revolution era 4.0.

Ahmad Luthfi, who was the founder of Klik Acara from UI provided motivation for young people.

According to him the young generation must be at the forefront of the era of the digital industrial revolution.

"In digitalization there are two effects, the perpetrator. As a youth organization, how do the actors streamline and build new things from the effects of social media in the 4.0 industrial era. This must be built into an effective and positive thing," he said, in providing material.

He gave an example, that the start-up industry was the biggest in the current era of industrial revolution 4.0.

Most, he continued, those who do are young people who are tech savvy.

Therefore, he requested that the start-up business that the region should be able to take by the youth could really be maximized.

"Who says start-up must have large capital. Young people must be brave, because 80 percent of the world's big start-up companies start from small capital. Under 100 million. Only 2 percent use billions of capital," he said.

The same thing was confirmed by the second speaker, Addin Jauharudin. The Wholesale One Founder emphasized that what needs to be had in the current digitalization era is the courage to produce a breakthrough.

"If that can be done, then the spaces that become a challenge for young people in the industrial revolution era 4.0 will be conquered," he said.