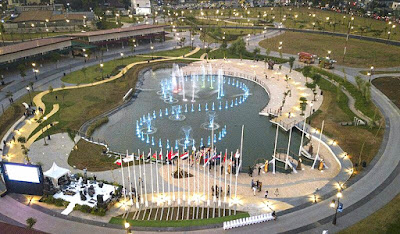 Park tourism in the center of Bandung is now increasing. His name is Kiara Artha Park. Although it has not yet been formalized, visitors who have come to the park, which is open to the public since August 17, 2019, have been flocking.

Kiara Artha Park is located on Jl. Jakarta, Bandung. In this 2.6 hectare park, there is an area built to commemorate the Asian-African Conference held in Bandung in 1955. The area is called the Asia-Africa Park. In the park stands a statue of the half body of the KAA initiators and all the flags of the participating countries

The plan, Kiara Artha Park will be inaugurated at the end of 2019. Currently, the park is opened for the trial phase and is still completing various existing facilities.

Although it has not yet been formalized, the people of this flower city seem to be impatient to enjoy the spots and facilities provided. Here are some spots in Kiara Artha Park.

Dancing fountain is one of the most interesting spots for visitors. Presenting waterfall attractions in rhythm with the music, accompanied by colorful lights make the audience amazed and entertained.

No need to go far to feel the nuances of cities in Korea. Kiara Artha Park area also provides Korean Village which can give you an atmosphere like in the land of ginseng.

If you are interested in going around the Asia-Africa Park area, Kiara Artha Park also provides tram facilities that can take you for a walk around the park. The tram provided is vintage and it is said that the tram is similar to the Bandung City Bandros Bus. Until now, only two red and green trams are available which run alternately from morning to night.